Want to improve your film photography? Get all my tips on film stock, cameras, developing and more! Sign up for my exclusive newsletter. It’s free! 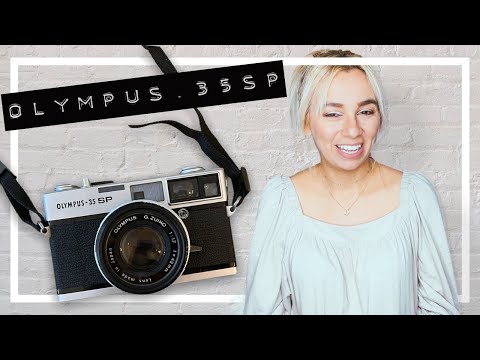 Two months ago I decided to shoot some films again. I started with my Canon Rebel 2000, a very trustworthy SLR that I would recommend to anyone who wants to start shooting on film, especially those who already shoot with Canon digital cameras, as the controls are very similar and this camera offers some very useful programs.

I feel like I’m shooting with my 6D, only I can’t see the pictures right after I took them.

So I was looking to add some challenges to my process and I did want to start using a rangefinder. I think rangefinder cameras are more aligned with what I’m looking for in photography right now than SLRs.

I started looking for some cameras and because I have an Olympus Trip that belonged to my mother and I love to shoot with my digital Olympus Pen, it was natural that I looked for an Olympus rangefinder.

That was when I discovered the Olympus 35SP and, after reading some reviews, I knew I was in love with this model and I had to have one. Long story short: they had one available at a store I trust here in Toronto and I got that as a sign. And now we’re inseparable.

In this video I wanna share with you why I love this camera, my experience shooting it and some other details. I’m gonna show some photos I took with it as well.

The first thing that brought my attention to this camera was the quality of the lens. It comes with a Zuiko F1.7 42mm. It’s not interchangeable but I was actually looking for something like this: I wanted a good fast normal prime lens and this one checked all the boxes.

Another great thing about this camera is its spot metering system, very sophisticated for the time this camera was released in the 70’s. So you can actaully choose the exact point of the frame to meter the light. And as far as I’ve been testing it, it’s very accurate.

Although the camera is fully mechanic operated, you do need batteries to run the meter and that was the only concern I had before my purchase.

The Olympus 35SP originally used a 1.35 volt mercury cell battery which no longer exists. In some forums I found that you can use an alkaline 1.5v but you have to compensate the meter in one stop, which pretty much already solves the problem. You can, for example, set the ISO one stop down and forget about it.

But digging even deeper I found out the Wein Cell battery that I could buy from Amazon and they work perfectly. I mean, I don’t have to compensate for anything.

Since then, I haven’t had any issues with the meter. Most of the photos I took in the beginning were on auto mode. I mean, the camera measures the spot and chooses the settings. The exposures came out very nicely. But now I’m trying to shoot on full manual because the camera doesn’t tell you the settings that have been chosen, therefore sometimes you don’t get the results you want because the aperture was too high and didn’t focus everything you want or the speed was too slow for a hand-held photo.

Now about the focus system. Well, as I said, it’s my first time focusing on a rangefinder camera and it was hard for me in the beginning. Actually it’s not a piece of cake yet, but I’m getting better. To be honest, it’s kinda difficult in the beginning but I do believe it’s easier than a SLR focus when you actually know how to do it.

Side note: it’s very hard to focus on a shar-pei! Too many wrinkles.

But that’s okay, I feel I’m getting better and I’ve been practicing zone focus which I think is gonna help me a lot with street photography.

When you get the focus right, this lens is very sharp. I realized with large apertures you can get some vignetting, but you can get rid of them in post-production.

And that’s more about me, of course, but I noticed that, so far, I’ve had more success in focusing when the subject is about 2 meters away from me.

Rangefinders can be a little tricky to compose as well, but with time you can get used to your camera and know how to compose correctly. If you want a little tip… I stuck a piece of tape right in the middle of the camera, at the same direction of the lens, so after I compose my shot, I move the camera until my eye sees the tape and press the shutter button.

The first thing I did was put a UV filter over the lens. Now I can carry my camera around without worrying about scratching my lens. You can attach any 49mm filter but be aware the meter is not on the lens, so you have to compensate if you want to use ND filters for example.

For your first shots, choose a roll you already know. That way it’s clear to see what you have to improve shooting this camera because you know how to deal with this particular film stock.

Start shooting in auto mode so you can focus on learning the focus system. After being confident with that I strongly recommend shooting in full manual because that’s how this camera can truly shine.

If you have any questions about this camera or my process, please let me know in the comments section.

I'm a Blogger and Entrepreneur who loves photography. I created this blog to share The 100 Rolls Project, in which I'm gonna shoot 100 rolls of film in 2021.

Be up to date: